Airbus, previously EADS, is one of the largest arms companies in the world. This is despite its arms sales comprising around 14% of total company sales. Its headquarters are in France and it also has substantial production in Germany and, to a lesser extent, Spain and the UK.

It has three divisions:

In addition to these, Airbus has a large stake (37.5%) in MBDA, Europe’s dominant missile manufacturer. 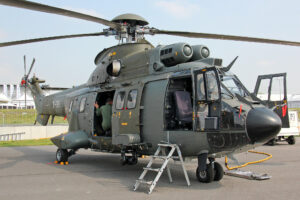 The Eurofighter Typhoon has been a core part of the Saudi military’s devastating attacks on Yemen over the past six years. Attacks have also used MBDA’s Brimstone and Storm Shadow missiles. For more information, see CAAT’s Stop Arming Saudi Arabia campaign.

In 2012 the Serious Fraud Office opened an investigation into a subsidiary of the company, GPT Special Project Management, after allegations of bribes to Saudi Arabian officials to win a communications contract for the Saudi National Guard. In July 2020, the SFO charged GPT and three individuals.

Airbus supplies helicopters including to US Customs and Border Protection, drone services to the EU’s border force Frontex and land and coastal border surveillance systems.

More information on Airbus’ borders activities can be found in The Business of Building Walls (page 31, in particular).