Thales is one of the world’s largest arms companies with over $9 billion of arms sales in 2019.

It is 26% owned by the French state and almost half its employees are in France. However, it also has substantial production in many other countries including the UK, the US, Australia and Germany (Universal Registration Document, page 127). 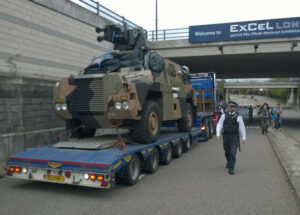 Thales is one of three major arms companies (along with Leonardo and Airbus) that play a particularly critical role in militarising Europe’s borders.

Thales manufacturers maritime surveillance systems for drones, provides the security system for Calais, and has researched how to track and control refugees before they reach Europe (The Business of Building Walls). Its Watchkeeper drone has been used by the UK army to “tackle the increasing number of small boats” crossing the Channel.

More information about Thales’ borders activities can be found in The Business of Building Walls (page 34, in particular).

Thales is involved in several armoured vehicle programmes, including Bushmaster (image above). Bushmaster vehicles have been sold to Australia, Indonesia (for Kopassus, the Indonesian Special Forces), Jamaica, Japan and the Netherlands. They have seen operational deployment in Afghanistan and Iraq.

Thales is a major supplier for the Rafale combat aircraft, accounting for 25% of its value. The company’s electronics are integrated into Rafales supplied to France, Egypt, Qatar and India.