At the Peoples’ World Conference on Climate Change from 19-22 April 2010, activists and grassroots organisations from around the world gathered to address what they see as the failure of governmental climate policy at Copenhagen.

Working Group 4 was charged with developing a proposal for a global referendum on environmental issues. However, the debate among the participants ranged frequently and profoundly into issues of war, militarisation and occupation. 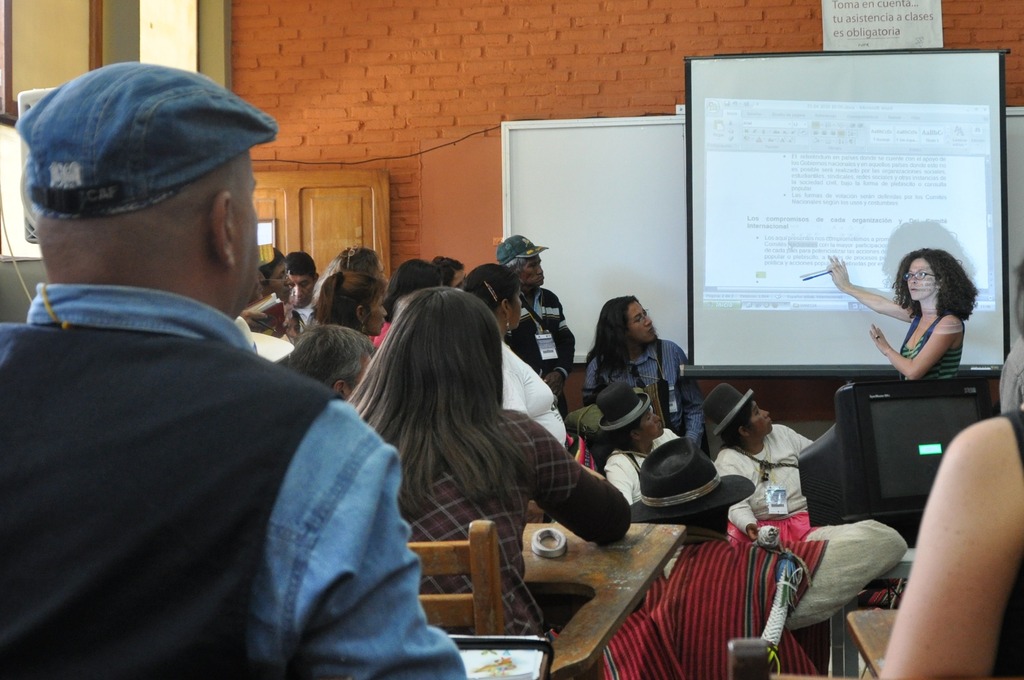 Discussion at the PWCC, Bolivia, April 2010

The group concluded two and a half days of discussions by submitting to the plenary session a document outlining their plans for the structure and preparation of the referendum. Their proposal recommended that it comprise the following five questions:

1) Do you agree with changing this capitalist model of over-production and super-consumption, and re-establishing harmony with nature, recognizing and respecting the rights of the Mother Earth? YES or NO

2) Do you agree that countries and transnational corporations reduce and reabsorb their greenhouse gas production proportionally to their emissions and historical responsibilities in order to halt global warming? YES or NO

3) Do you agree with transferring all that is spent in wars and for allocating a budget bigger than used for defence to climate change? YES or NO

4) Do you agree that our countries be transformed into territories of peace, free from occupation by troops and foreign military bases? YES or NO

5) Do you agree with a Climate Justice Tribunal to judge those who destroy Mother Earth? YES or NO

Marta Harnecker, Chilean author and activist, was the proponent of question 4, which was accepted by group consensus. She said:

“It was a surprise, yes. Of course it still hasn’t been voted on, but it seems a very positive thing to me that the people here are so sensitive to the subject of peace. It’s a very important theme, which we must include in this process of fighting to change the system that causes so much war, just as much as it damages nature. This way many more people can join together around this referendum. There are people that don’t support political parties, but they want to fight for peace and fight for nature.”

Joel Marsden, elected co-president of the working group and director of the documentary World Vote Now, stressed to the group that only questions acceptable to organisations like the EU would be able to take advantage of existing election infrastructure, though he was equally supportive of including the subject of militarisation. He commented:

“I wanted to actually put more of it in, but it made its way into two of our five questions, which is great. Now it’s interesting that it was so universal, it was like all arms spending should be put towards the environment, but it’s just not realistic somehow. I would much rather guide something that really is obtainable, even though it can be quite radical.”

He is enthused about the prospects for global referendum following eight years of research for his film into democratic movements under difficult conditions. This included visiting elections in countries flooded with weaponry, like the Democratic Republic of Congo: “Illegal arms or official arms just destroy democracy and then to fight back with ballots is a much slower process. But it happens, and it gives me hope. Well, we saw the first election happen. People voted for the constitution and approved it.” 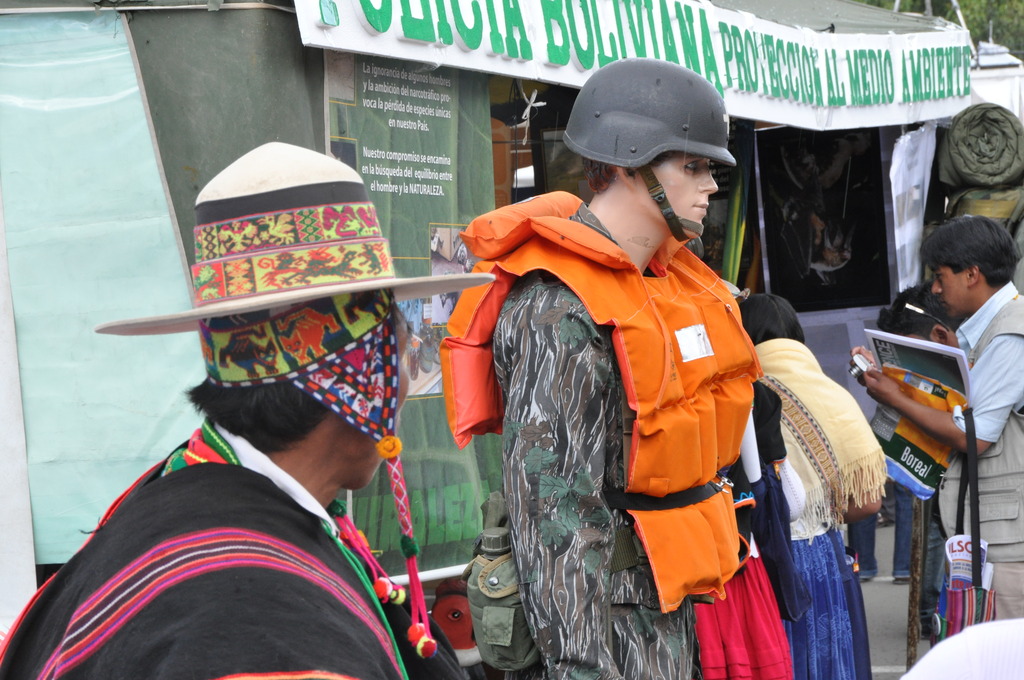 Military at the PWCC, Bolivia, April 2010

Question 3, on diverting arms spending towards environmental protection, remained unchanged from the initial draft written by Bolivian president Evo Morales Ayma. Given this initial governmental statement of pacifism it was surprising to see a large presence of military personnel at the conference, patrolling, running stalls and also participating in working groups. Military leaders also formed a large component of the official international guests at the president’s opening and closing addresses.

Coronel Rafael Marcelo Villaroel Vargas explained the Bolivian Army’s activities pertaining to the environment. “The army is totally involved in the environment in two different situations, one of security, protecting our flora and fauna, and the other is education. We train around 60,000 soldiers annually and this includes reforestation, composting and building solar cookers. Apart from this we train them in domestic matters like sorting organic and inorganic waste. We’re only reaching one member of the family, which is only one quarter, but for us it’s an important step.”

Meanwhile, protesters outside the event displayed banners of government spending statistics that attributed twice as much money to the armed forces as to education and health combined, and in La Paz the government faced accusations from opposition parties that the climate summit was a smokescreen for militarisation efforts.

Throughout the referendum talks, participants showed a wide-ranging knowledge of militarisation issues, and were keen to tap the educational potential of a global referendum by densely packing the questions with references to important themes.

Brazilian activists from the international peasants’ movement Via Campesina and the pro-referendum organisation Consulta Popular explained to the working group the current situation in central America and Colombia, where vast US military bases are located in prime positions to guard natural mineral and fuel resources, undermining local decision making on extraction and usage and imposing a dangerous and destructive environment on existing populations and habitats.

Many practical details of the referendum were left open as the group decided it was crucial to defer autonomy to national and regional committees, including the right to alter questions to address local concerns and worldviews. National governments will be invited to stage the referendum, though in regions where they are unable or unwilling the working group is calling on non-governmental groups and people to begin preparing for the referendum autonomously.

Amalia Cuaquira Calani, member of the Bolivian peasant women workers’ group the Bartolinas Sisas was the other co-president of Working Group 4 and was responsible for building consensus among the participants through discussion and voting. She said:

“I’ve learnt this in my long life, if we don’t dream, if we don’t have hope we can’t create. We are creating a process for the referendum. We know that it’s not going to happen in a year, two years, but with these questions we’re launching the referendum. Now it depends on the activists and organisations to defend the mother earth. I have that hope. It’s going to be long term, but the important thing is to start, because we’re talking about human life and I believe it’s important that everyone joins in. We’re going to move forward.”