I joined campaigners from Bahrain Institute for Rights and Democracy (BIRD) and London CAAT last weekend outside the Windsor Horse Show. This prestigious event takes place in the grounds of Windsor Castle, and involves show jumping, carriage driving and racing.

The royal family of Bahrain is closely involved in the event, both offering prizes (the “King’s Cup“), and as participants (Bahrain’s Prince Nasser often takes part in the endurance race). The King of Bahrain is usually invited, and over the weekend attended a banquet on Saturday as the guest of the Queen. Bahraini troops even escorted the Queen during her Platinum Jubilee event, which followed the Horse Show on Sunday. 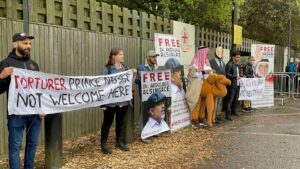 Bahrain is an authoritarian dictatorship, an absolute monarchy, which has a long history of human rights abuses. Allegations of torture go back decades, and during the “Arab Spring” the regime jailed dozens of pro-democracy activists, many of whom are still in prison. Medical neglect of prisoners, and threats to dissidents and their families are common. Survivors of torture and teargassing by the regime were present on the demonstration at the weekend, which also highlighted the long term abuse of political prisoners by the regime.

Which begs the question, why invite the leaders of this regime to lunch? 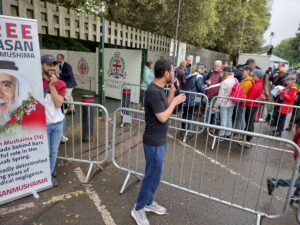 For one thing, the country is a priority market for arms sales. After a brief pause during the worst of the uprising, the UK continued to license the weapons used for the repression. Arms sales are made at the top level of Government, and in Bahrain’s case, that means the Royal Family.

For another, Bahrain’s position as an island in the Persian Gulf makes it important to the UK as a “forward base” for its warships, operating out of Mina Salman in Manama – whose jetty was upgraded in 2020 to take large UK warships. In the past, British warships patrolling the Indian Ocean would have to make the long voyage back to the UK for refit and repairs and to give the crew a break. In future, there are plans to leave the next generation of ships in position, and simply fly out a change of crew.

It is part of what War on Want have called, the “new British Imperialism” where the UK actively supports repressive regimes militarily in return for basing and arms deals, stamping on the democratic rights of the people in the region as it does so.

All of which leads to the bizarre spectacle of the constitutional monarch of a Western Democracy being guarded at her first Platinum Jubilee event by the armed forces of a country involved in tear gassing, jailing and killing protesters. And having lunch with the very people responsible for that repression.

As you enjoy the Jubilee Bank Holidays next month, whether it is tucking into jelly and ice cream at a street party or taking a long overdue holiday, spare a thought for the people of Bahrain and consider what you can do to stand in solidarity with them. Because freedom enjoyed at the expense of others is no freedom at all.