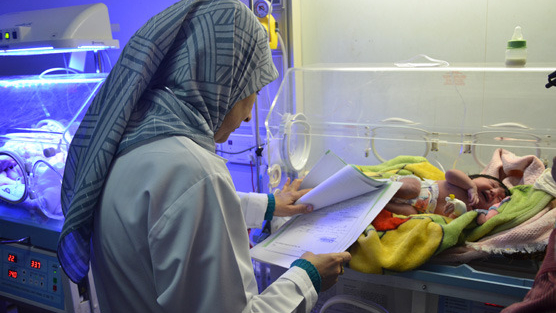 During the occupation of Iraq, the city of Fallujah bore witness to some of the most intense US combat operations since Vietnam, with 2004’s Operation Phantom Fury widely condemned for its ferocity and disregard for international law.

Paediatrician Dr Samira Al’aani has worked in the city since 1997. In 2006 she began to notice an increase in the number of babies being born with congenital birth defects (CBD). Concerned, she began to log the cases that she saw. Through careful record keeping she has determined that at Fallujah General Hospital, 144 babies are now born with a deformity for every 1000 live births.

This is nearly six times higher than the average rate in the UK between 2006 and 2010, and one strong suspicion is that contamination from the toxic constituents of munitions used by occupying forces could be the cause.

Now a new nationwide study by the Iraqi Ministry of Health, in collaboration with the World Health Organisation (WHO), has the potential to catalyse efforts to understand and confront the issue, but only if science can be allowed to rise above politics. For years there have been huge problems with funding, political bias and delays.

In March 2013, BBC World broadcast a documentary on the story. As with other media reports, Born Under A Bad Sign visited the hospitals and spoke with parents and doctors – all of whom were convinced that the health problems they were witnessing were linked to the war.

Journalist Yalda Hakim took this up with staff from the Ministry of Health and was able to discuss the CBD data with them. Although nervous, and reluctant to provide too many answers, citing political pressure, they confirmed that the study would find a link between increased incidence of CBDs and areas subject to the most intense fighting in 2003.

If true, this is a hugely significant and profoundly political outcome, and while it doesn’t identify a single causal factor for the increase in CBD rates, it narrows the field considerably.

While the long-term impact of explosive remnants of war such as landmines and cluster bombs are familiar to most, questions are increasingly being asked about the public health legacy of toxic remnants of war. While the two most notorious examples are depleted uranium and the dioxin contaminated Vietnam-era herbicide Agent Orange, an analysis of commonly used military substances – from heavy metals to explosives – demonstrates significant potential for harm from a range of materials.

Unfortunately data on the toxicity, environmental behaviour and dispersal of these substances is limited as militaries have often only undertaken research into the effects on their own troops or when faced by domestic regulations over emissions from firing ranges. This lack of data and the unpredictability of conflict means that accurately predicting the risk to civilians is enormously challenging. That no system of comprehensive post-conflict environmental assessment exists will ensure that many of these data gaps will remain.

Calling on WHO to act

So how can civil society and individuals influence an organisation as monolithic and apparently compromised as the WHO?

On 31 July, Dr Al’aani launched an online petition through Change.org (with the associated twitter hashtag of #Act4Iraq) calling for the WHO to immediately publish the collected data for independent peer review, so that scientific conclusions can be drawn and the affected parents can finally understand what has happened to their children.

For them, and for Dr Al’aani, the unfolding health crisis concerns far, far more than a debate over numbers and statistics. For those of us who are citizens of the states that invaded Iraq, it is vital to understand whether we carry a share of responsibility for those parents’ suffering, and to demonstrate to Iraqis that the world has not forgotten about their country.

Read the full blog post by Doug Weir examining the need for the #Act4Iraq campaign in more detail which discusses previous examples of politicisation of health research in Iraq. The full article was first published in the New Left Project.