Courts throughout the UK are prosecuting individuals whose only crime is to refuse to fill out the 2011 census form because of the involvement of arms giant Lockheed Martin. The refusers face a fine and possible jail sentence for their actions.

Lockheed Martin is based in the US and was contracted to process census data from England and Wales. The refusers say that it is unethical for a weapons manufactuer to be involved in the census, especially as Lockheed Martin has exanded into the security and surveillence industry and personal data could therefore be at risk.

Preliminary hearings for the census refusers began coming before magistrates’ courts in November and December. Refusers who plead “not guity” are having hearings deferred to the new year, often transferred to courts miles away from their local area.

One refuser is 56-year-old grandmother Sarah Ledsom from Bromborough, in the Wirrel. Before the court hearing, Sarah, who is physically disabled, said:

“My conscience will not, cannot condone what is happening to the good people of Palestine, innocent men, women and children being murdered by arms provided by Lockheed Martin to Israel. The very same Lockheed Martin who were given the contract to oversee the census 2011.” 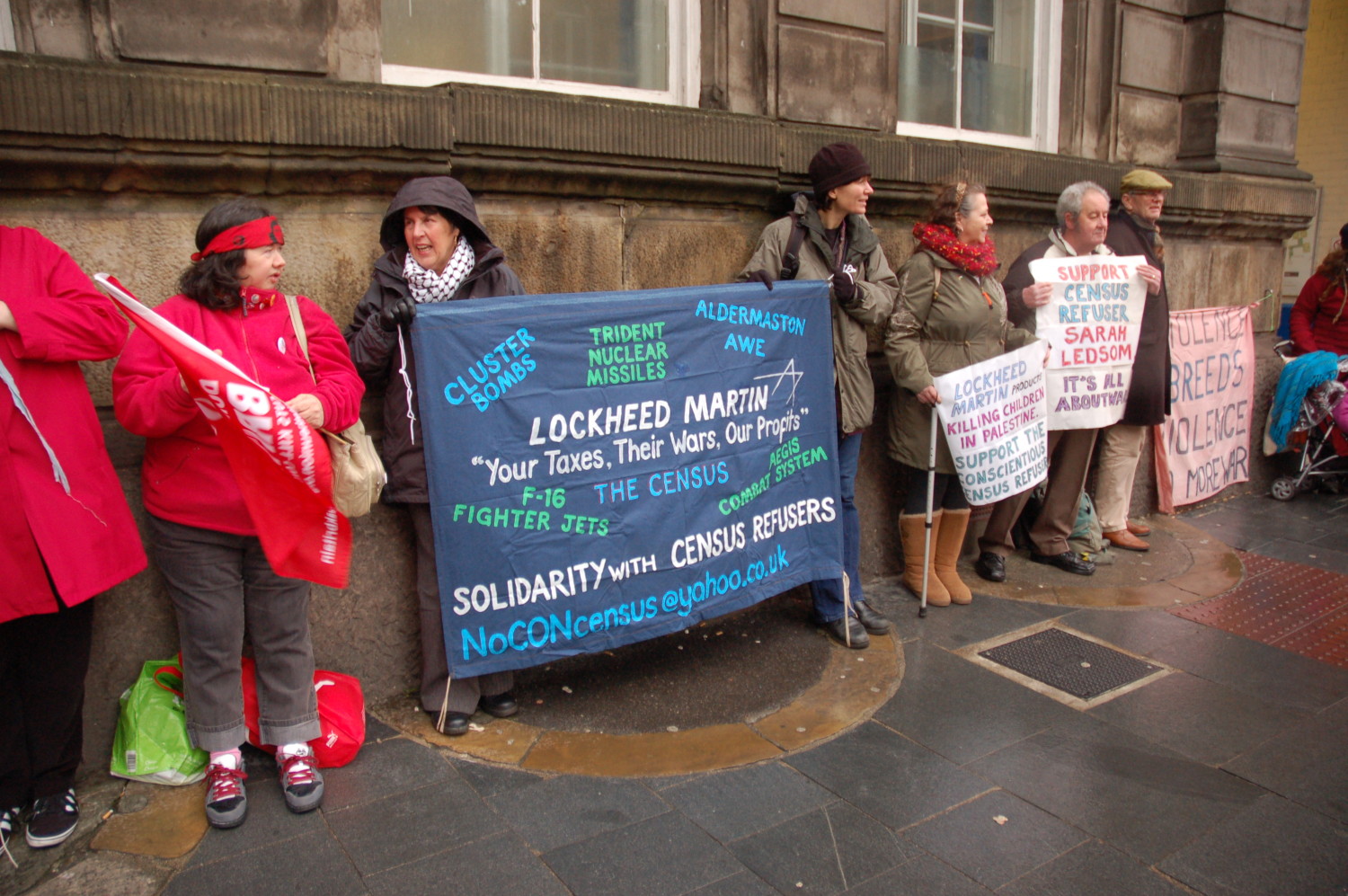 Sarah appeared at Dale Street Magistrates Court in Liverpool on 8 December. A solidarity demostration of around 20 people braved the atrocious weather to display banners and placards aupporting Sarah and condemning Lockheed Martin. The hearing, where she pleaded not guilty, lasted a few minutes and her case was remanded until 17 January.

If found guilty she faces a fine of up to £1,000. Sarah said “I will refuse to pay any fine and am more than prepared to go to prison.”

“I cannot thank you all enough for turning out yesterday, in the most appalling weather. I am so sorry for not being able to thank you all personally, but I was whisked off by the BBC for an interview which ended up being screened last night…. if you werent there with the banners and posters, the media wouldnt have been interested…Yesterday, was the most humbled I have ever felt, and will remember it for ever, so thank you.”

Sarah Ledsom was not the only census refuser to appear in court that day. Another refuser had his case postponted until 18 January.

There are cases from other areas. Judith Sambrook had a first court hearing on 11 November, Remembrance Day, at Wrexham Magistrates Court, miles away from her home in Shewsbury. Twenty people joined a solidarity protest displaying colourful banner before the court hearing, followed by a silent vigil at the war memorial. 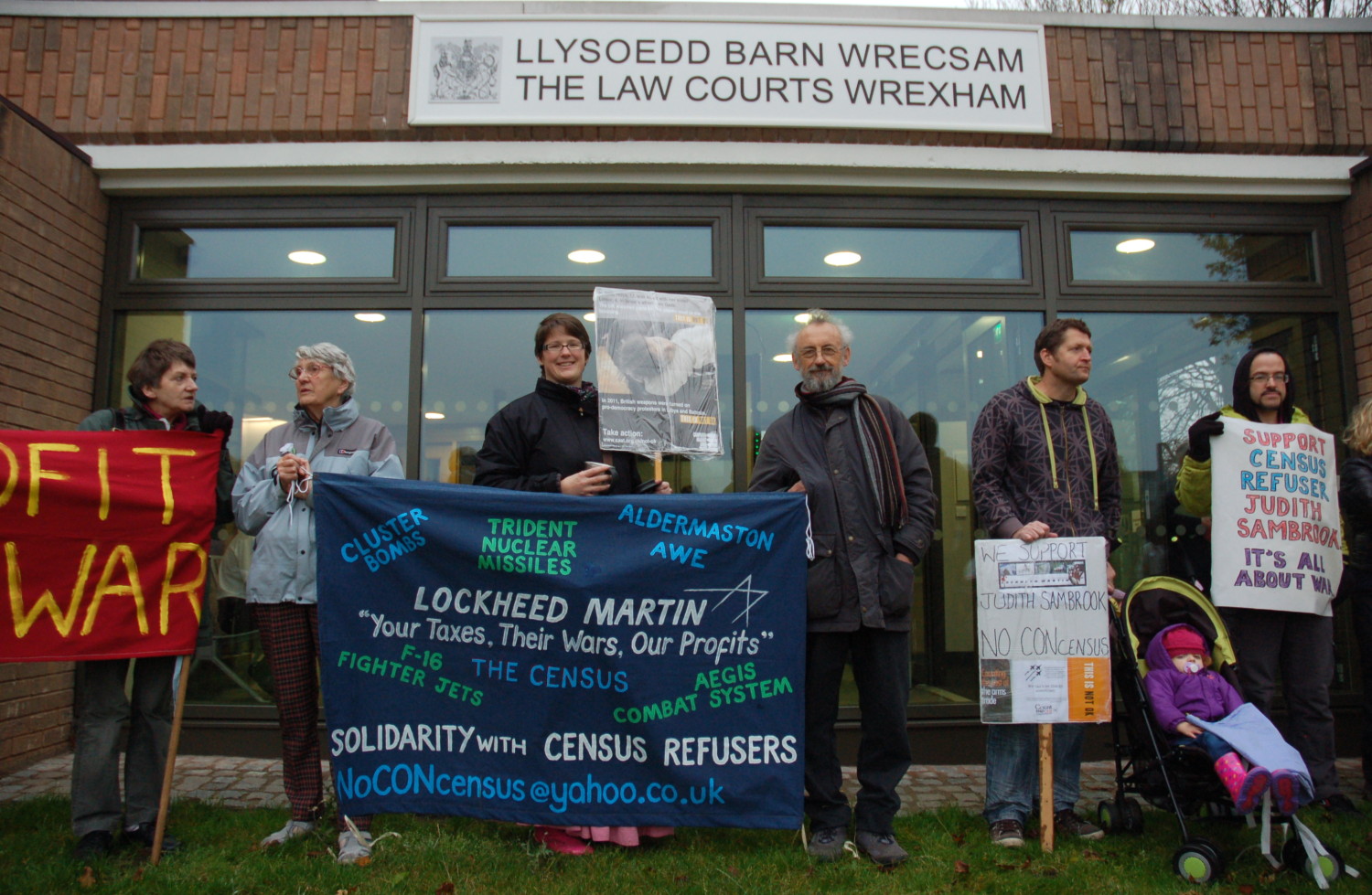 Judith pleaded not guilty. There will be an interim hearing (for case management in February at Mold in Flintshire, even more distant. Judith, aged 47, is a single parent and kidney dialysis patient. so the extra travel is especially hard on her. The hearing proper will be at Wrexham in March.

Both Sarah and Judith are supported by NoCONcensus, formed in May 2011. NoCONcensus aims to support any census refusers coming before the courts, putting them in contact with others in the same situation, helping to publicise their cases, their reasons for refusal and the wider issues raised.

NoCONcensus knows of at least three other cases – John Goldstein, from Worcester, first appeared before Birmingham Magistrates on 23 November,  Deborah Glass Woodin of Oxford, whose case is scheduled to be heard on Tuesday 13 December at Reading and Roger Grenville from Leamington Spa, whose case comes up in Birmingham on Thursday 5 January.

NoCONcensus is keen to learn of other cases. If you are a census refuser or know of others facing court cases, please contact them at: noconcensus(at)yahoo*co*uk

Updates will be posted on indymedia.org.uk and also on network23.org/countmeout.blog.

Further information on Count me Out