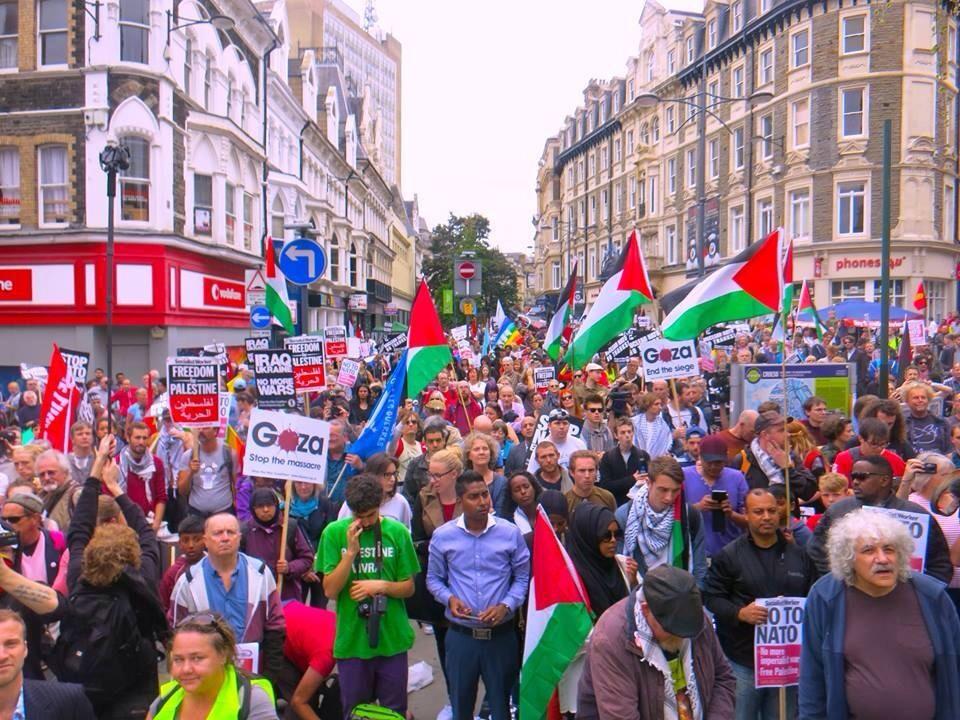 Protesters take to the streets of Newport

When NATO defence ministers dine together aboard HMS Duncan later this week, arms companies will be rubbing their hands in glee as we, the public, continue to underwrite the cost of their promotion.

HMS Duncan is a BAE Systems destroyer ship. While BAE’s ship will be showcased at the dinner; its Typhoon planes will feature in an RAF “flypast” at Celtic Manor, the venue for this week’s NATO summit.

Public money will be spent on securing the dinner, as well as on paying for the warship’s time, the fighter jet’s flight, and the crew. This is probably only scratching the surface of the many ways in which UK-military personnel and public funds will be used to promote arms company sales over the next week.

The government has boasted that there will be “an array of army equipment and capabilities” on display throughout the week. When they say they will be showcasing Wales’ “cyber technologies and aerospace”, we know they mean arms dealing.

In fact, the summit has already been used as a platform to promote arms sales, with the government announcing that it is spending £3.5 billion on armoured vehicles in the next three years while also warning about the dangers of “prioritising social welfare”.

BAE Systems, Raytheon and Lockheed Martin are among the arms companies “providing financial backing” for the summit.

That’s the same BAE Systems whose armoured vehicles were deployed in the brutal suppression of democracy protests during the Arab Spring. The same Raytheon whose bunker-busting bombs have wiped out entire families in Gaza and Lockheed Martin, the biggest arms company in the world – which is responsible for nuclear missiles, and the drones that have haunted Afghan skies.

These companies are quite explicit about the profit to be had from tension and conflict. As BAE put it in a recent annual report, “Regional tensions combined with enduring high oil prices result in robust budgets and increasing opportunities.”

Their close relationship with the government, and their effective lobbying means that public funds are poured into military technology we do not need, while public services are decimated. This year, the government announced £2.5 billion spending on fighter jets. Why? To fight unnamed “future threats”. The immediate reality is that 1 in 4 children are growing up in poverty, and that is being pushed to one side as arms company profits and power projection are once again prioritised.

This dangerous choice of power over people is mirrored throughout NATO states – which together account for over 70% of global military spending. Despite this, David Cameron is reported to be calling for members to increase their military spending at the summit this week.

NATO doesn’t just wreak havoc around the world in the wars it wages, but also in the way its members arm the world: Seven of the ten biggest arms exporters are NATO members.

We know the disaster that has followed in the wake of NATO’s military intervention in Libya. But this isn’t the only way that NATO has escalated tensions. NATO members were among those that were arming Colonel Gadaffi just months before he turned his guns on civillians.

Ukraine is playing a special role this week , but NATO member states won’t be highlighting their role in arming both sides of the conflict. Cameron won’t mention that while the Malaysian Airlines passenger jet was shot from the sky, Russia’s state arms company was selling weapons alongside Ukraine’s state arms company at the arms fair he opened here in the UK. Nor will he mention that when he said he was imposing an arms embargo in Russia, he only really suspended 34 of the 285 licences.

The arms trade and the militarism on which it thrives are obscene. That’s why resistance to NATO is so important. Every time we challenge militarism, we unpick the consent it assumes and bring humanity back into the equation.

When Gaza was attacked this summer, we saw an indication of the scale of resistance to militarism. Just outside of Birmingham, activists locked the gates and occupied the roof of Israeli drones manufacturer Elbit Systems, shutting the factory down for 36 hours. Ten days later, and thousands of miles away, an Elbit’s factory near Melbourne was occupied too.

Airbus, which has a site in Newport, faced simultaneous actions in the run up to the NATO meeting: its missile manufacturer’s office was shut down while grim reapers ‘haunted’ staff arriving at its UK headquarters. Meanwhile the roof of the army recruitment office in Cardiff was occupied for two hours.

What this summit makes clear is that our government’s priorities couldn’t be further from those of ordinary people. Why is £2.5 billion being spent on fighter jets while child poverty soars? Why do arms companies get such huge public subsidies while renewable energy, which could improve human security rather than undermine it, is so drastically underfunded?

It doesn’t have to be this way. Last week, Ecuador announced a 51% reduction in its military facilities – to be converted to public use as parks, hospitals or schools. This week, as people challenge NATO, we are also challenging the hold that arms companies’ have on governments.  We don’t just want to end arms sales, we want to end the militaristic mindset that promotes them in the first place.

To find out more information visit No NATO Newport and Stop NATO Cymru.