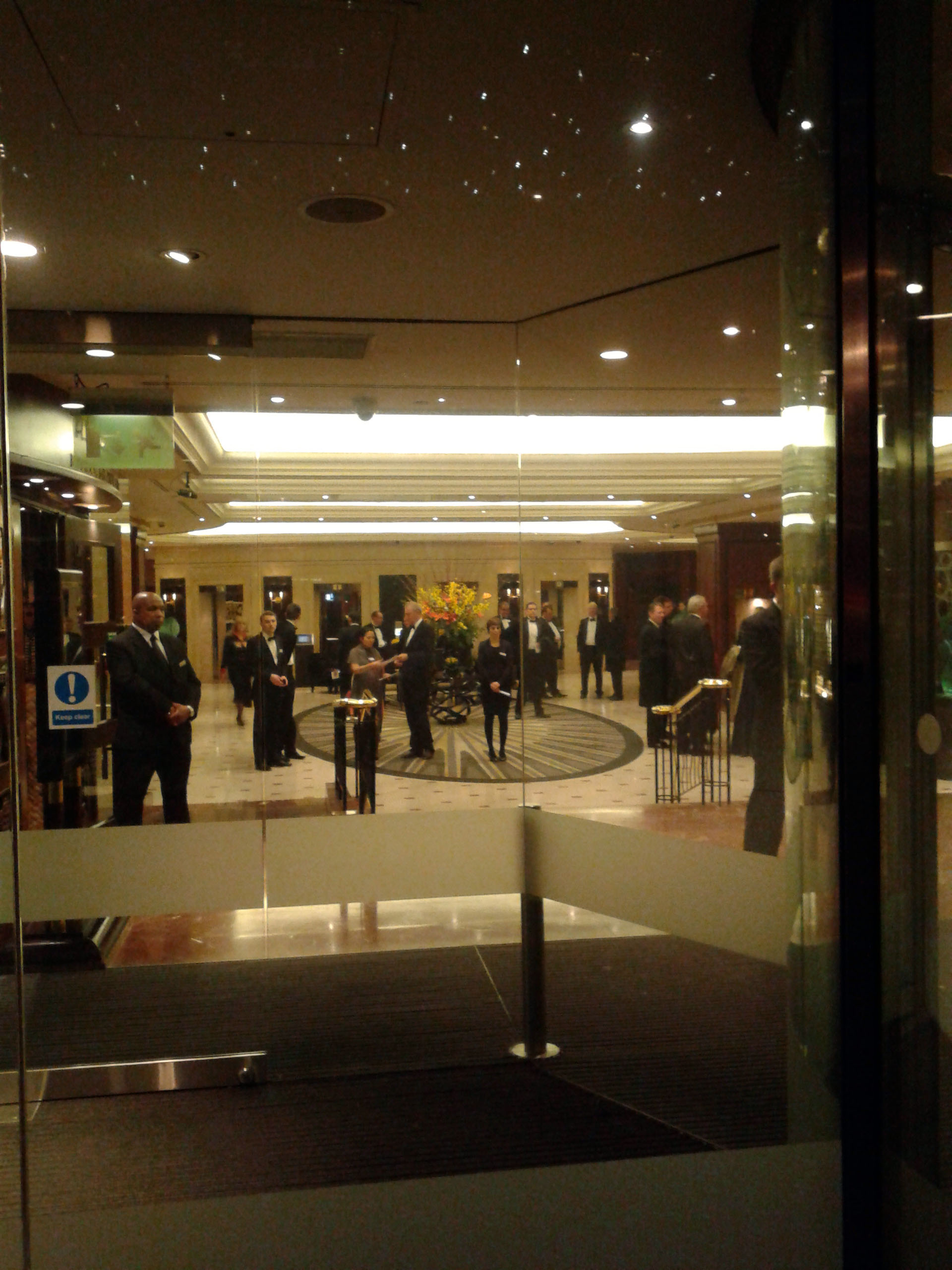 After last year’s fun and games, we didn’t expect to be welcomed into the annual ADS dinner at the London Hilton. Tickets cost over £200, and the guest list included Vince Cable, several MPs and bigwigs from all the UK’s largest arms companies. But even for an arms dealer’s dinner, the reception we got was quite surreal.

Even before the event, there was controversy. The BBC political editor Nick Robinson pulled out of giving the after dinner speech after a complaint from CAAT. And as the arms dealers arrived at the Hilton on the night, there was a lively crowd of protesters outside waving banners and chanting.

An invitation to dine with death

The four of us, dressed in our smartest outfits, walked straight into the Hilton to the rousing jeers of the campaigners outside. All we had to do now was get to the Grand Ballroom, where the dinner was being held. But as we got into the lobby, there they were – security men in black, enough to make the foyer look like an Antony Gormley installation! It was hard not to laugh.

We decided among ourselves to go to the bar first, to shake off our attendants. But as we ducked into the lift, a very large gentleman with a blank face and an ear-piece joined us just as the doors were closing. We stayed in the bar for about half an hour wondering if he might have gone away. But no, as we came out there he was, like some faithful hound.

We decided to split up. Two of us got in the lift, so that the other two could roam free. We were hoping to get to the first floor to join the party. No chance!

Another security man appeared out of the woodwork, jumped into the lift just as the doors were closing, and pressed the button for the ground floor. It’s obviously part of their complex training programme, this jumping into lifts. Back down in the foyer the Antony Gormley gang watched us being escorted/marched out.

But where were the other two? We went to the car park entrance at the rear. Lo and behold, two more security men. One of them told us that our friends had left at the same time we were coming out of the lift. In fact, the other two had made it to the first floor where more men in black were waiting for them. They’d obviously been following our every move- what a lot of complex security just for us!

I wonder if, when Vince Cable was in there telling them how well they’d all done over dinner and drinks, he knew how much they’d spent on security – all to stop four peace protesters. I wonder if it was enough to save several small businesses?