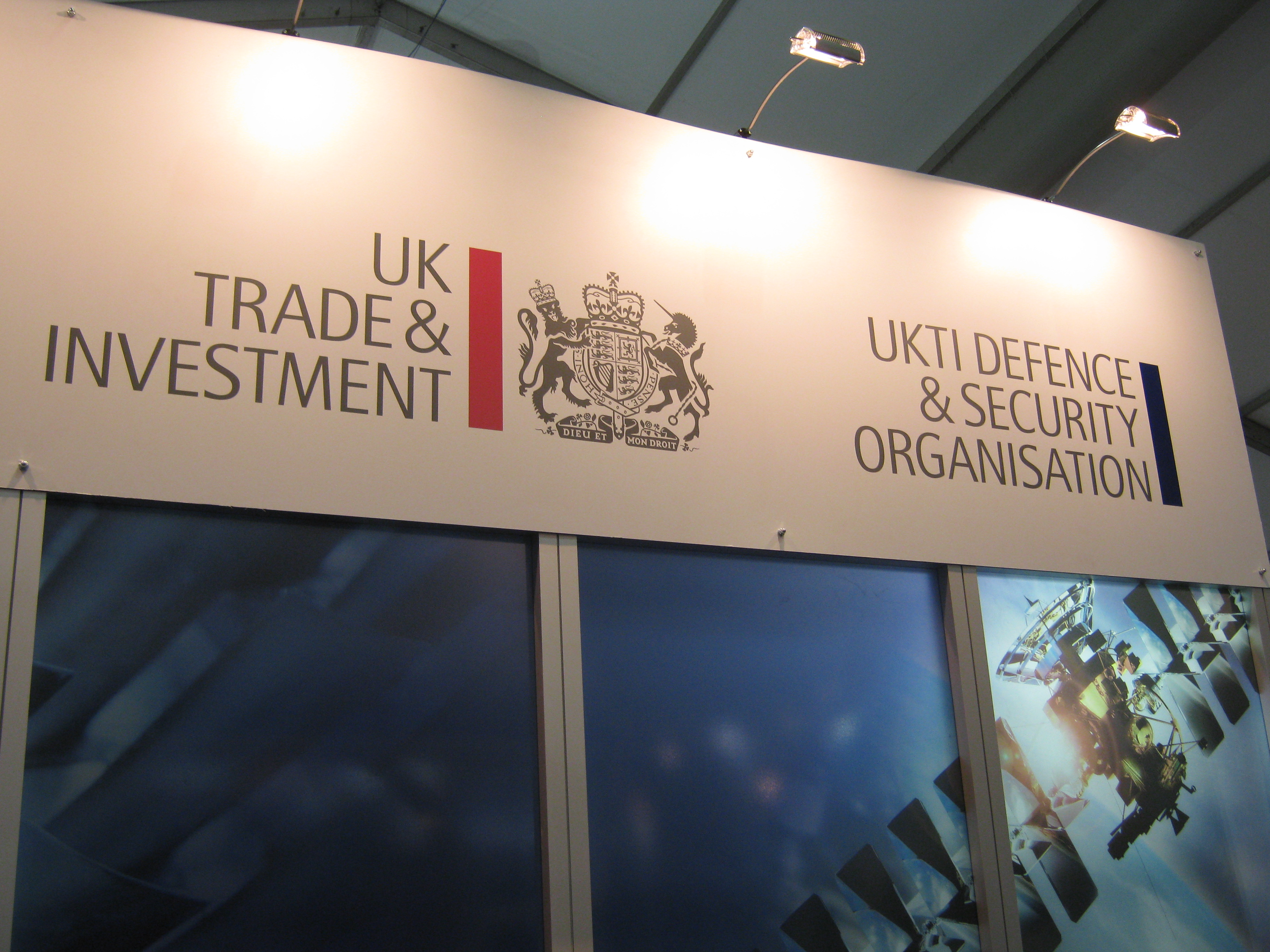 We didn’t think we’d get in. The UKTI DSO Symposium is the biggest event of the year for Britain’s exporters of “defence & security” gear – so you’d think they’d have better security.

We wandered into the hotel past the police and made our way towards the entrance to the Symposium. Not having the faintest idea where anything was, we were helpfully directed to the ground floor where registration and the first networking and mingling of the day was taking place. Amazing how far a nice suit can get you.

UK Trade & Investment (UKTI) is a government department that promotes all of Britain’s exports, and DSO is the part of UKTI that promotes arms sales. Arms make up only 1.2% of UK exports, but more than half the staff in UKTI belong to DSO, so the arms trade is getting hugely disproportionate support from the government at the expense of every other industry.

DSO is one of the key ways in which the government subsidise the arms industry, but it gets worse: they promote arms sales to just about anyone.  They currently promote arms sales to Bahrain & the Saudis, and Libya was even a “key market” until spring last year(!). DSO needs to stop wasting our money, stop promoting arms sales indiscriminately and shut down now.

Everyone who is anyone in the British arms industry was at the symposium. They invite all of Britain’s big weapons firms and pat each other on the back and talk about how wonderful they are for selling arms all around the world. Four government ministers were down to talk, and there were even some foreign dignitaries thrown in. 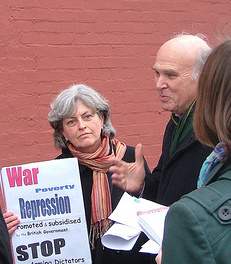 Vince Cable: lobbied by his constituents too

So we got in and I sat down at a table and I am absolutely bricking it. I just hadn’t thought what I’d do if we actually got this far. I had a look at the programme and Vince Cable was on second.  Now Vince used to support the closure of DSO, but power (or perhaps proximity to power in the Lib Dem case) changed all that. He is now the Head of the Department of Business, Innovation & Skills, which UKTI is part of.  Vince seems to have lost any notion that the arms trade might be bad, and now merrily hawks British weaponry to all comers.

So I decide I am going to interrupt Vince.

But first I had to go through the trial of listening the spectacularly dull Radio4-style voice that is the head of UKTI DSO talking about how the “sector has been performing robustly” despite there “not being a major platform order in the past year.” I was disturbed at how he talked about the arms trade as if it were selling spanners, not deadly weapons. No thought to how by encouraging arms sales money is diverted from development or how the arms trade fuels conflicts across the globe. No mention of how British arms are used by repressive regimes to torture and oppress.  Just exports and economics.

But it got worse: he boasted about how impressed everyone in the Middle East was when he travelled out there with “many people here in this room” and David Cameron – referring to how this government seem to think trips abroad are principally about flogging weapons. He went on talk about his recent trip to Libya, where there were so many “opportunities”, without even a hint of sarcasm. How anyone can be so blind to the results of their actions I do not know.

Eventually he stopped and Vince is given what can only be described as an arse-licking of an introduction by a vice admiral. Then Vince stands up, says about two words, and I run across and take the stage.

I wanted to say I was here for everyone in Libya, Saudi Arabia, Bahrain, Egypt, Palestine and everywhere else who had had British made weapons used on them. For everyone in Tanzania, India, Pakistan, South Africa and everywhere else whose governments were so swayed by the arms industry that they spent more money on arms than on health and schools.  I wanted to say that I was here for everyone in Britain who thinks the arms trade is morally abhorrent and wrong, and that everyone there should get down the job centre and do something useful with their lives.

What came out was slightly different, partly because of nerves and partly because I was swiftly grabbed by two burly fellows who dragged me out . It turns out they were both senior DSO staff: Keith Venables, Business Development Director & Dominic McNeice, Head of Events Planning. They led me out to the street, where I walked off promptly.

I’d been gone for a few minutes when I thought that they had probably called the police and that I should be accountable for my actions. I would love a day in court justifying why it was OK to interrupt a bunch of people talking about how to sell more weapons. The arms trade is such a force of evil in the world I know what I did is not wrong, irrespective of what the law says. For me, taking responsibility for your actions is important as well, although I respect and work with those who would disagree.

So I turned around and walked back into the hotel. I walked up to some police officers, who said “Can I help you?” and I explained who I was and that I was here in case they wanted to talk to me.  It turned out they did want to talk to me, and we had a little chat and I was searched – nothing worse than what happens to many black or Muslim men my age fairly regularly.

I was then introduced to a manager from the hotel, who explained that I was banned from all Park Plaza Hotels.  I explained that the hotel should not associate itself with the arms trade and that next year the protests would certainly be bigger and might damage their reputation, so they should not host the symposium again.  I was then taken out onto the street and that was that.

In case any of you were wondering how I will cope with being banned from the Park Plaza Hotel, I have since been assured that the train noise is terrible and very few rooms actually have a river view, so I am not too distraught.

If you want to get involved in taking action against the arms trade, come to a London CAAT meeting – every third Tuesday of every month 6:30 – 8:00 pm in Central Station pub near Kings Cross. Also check out Stop The Arms Fair.

Statewatch have also published an analysis of the DSO Symposium: “Brothers in arms“.