This Wednesday the Saudi Arabian cargo ship Bahri Yanbu is due at Tilbury docks.

CAAT is concerned that this ship is carrying weapons destined for use by Saudi-led forces in the war on Yemen, where there is a serious risk they will be used in violations of international humanitarian law. We are also concerned that it may be collecting further UK-made military equipment while it is at Tilbury. 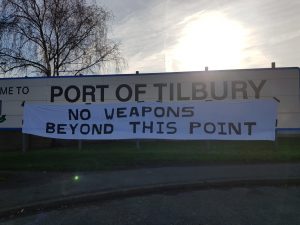 The war in Yemen

Launched in March 2015, the Saudi-led attacks on Yemen have created what the UN has described as the world’s worst humanitarian disaster, and thousands of people have been killed in the bombing, which has targeted schools, hospitals, food supplies, weddings and funerals.

UK-made combat aircraft, bombs and missiles have played a central role in these attacks – and the UK government continued to license arms sales to the conflict, despite overwhelming evidence of repeated breaches of international humanitarian law.

CAAT successfully challenged these arms sales in the courts, arguing they were in violation of UK’s own guidelines on arms sales, and European and international law: last year the Court of Appeal ruled that UK arms sales to Saudi Arabia for use in Yemen are unlawful.

Bahri, carrying arms for the war in Yemen

The Bahri shipping schedule includes stops in the USA and Canada, before visiting European ports, then travelling through the Mediterranean to Red Sea and Gulf ports. It began including Tilbury among its stops in March 2016 (on previous voyages, cargo from Tilbury had been carried to Antwerp for loading there).

On its current voyage, the ship has already visited ports in the USA, then Canada (where it is believed to have loaded weapons), before travelling onto Bremerhaven in Northern Germany. It cancelled a scheduled stop in Antwerp after action by Belgian NGOs.

The Bahri fleet is known to have carried weapons on previous voyages. For example:

CAAT is therefore seriously concerned that this ship will be carrying weapons destined for use by Saudi-led forces in the war on Yemen.

We are also concerned that may be collecting further UK-made military equipment at Tilbury. Despite CAAT’s successful legal challenge, which saw the Court of Appeal rule that UK arms sales to Saudi Arabia for use in Yemen are unlawful, weapons exports may continue under licences issued before the judgment. These could include components for combat aircraft and bombs used in the conflict.

Lawyers from Leigh Day, representing Campaign Against Arms Trade (CAAT), have written to the Government Legal Department seeking clarification as to the licence under which a Saudi vessel will be allowed to enter and subsequently leave the UK following its expected arrival, and whether any such licence is consistent with the Court of Appeal ruling in June 2019.