If you’ve got something right under your nose, it gives you the opportunity to confront the reality of the arms trade in a way that cannot be dismissed as ‘none of our business’. It also means that you don’t have the problem of slogging half way across the country to put up banners for a couple of hours. I have discovered that drawing attention to your local arms company office can be as simple as sticking a sign up- and can make a significant campaign impact. 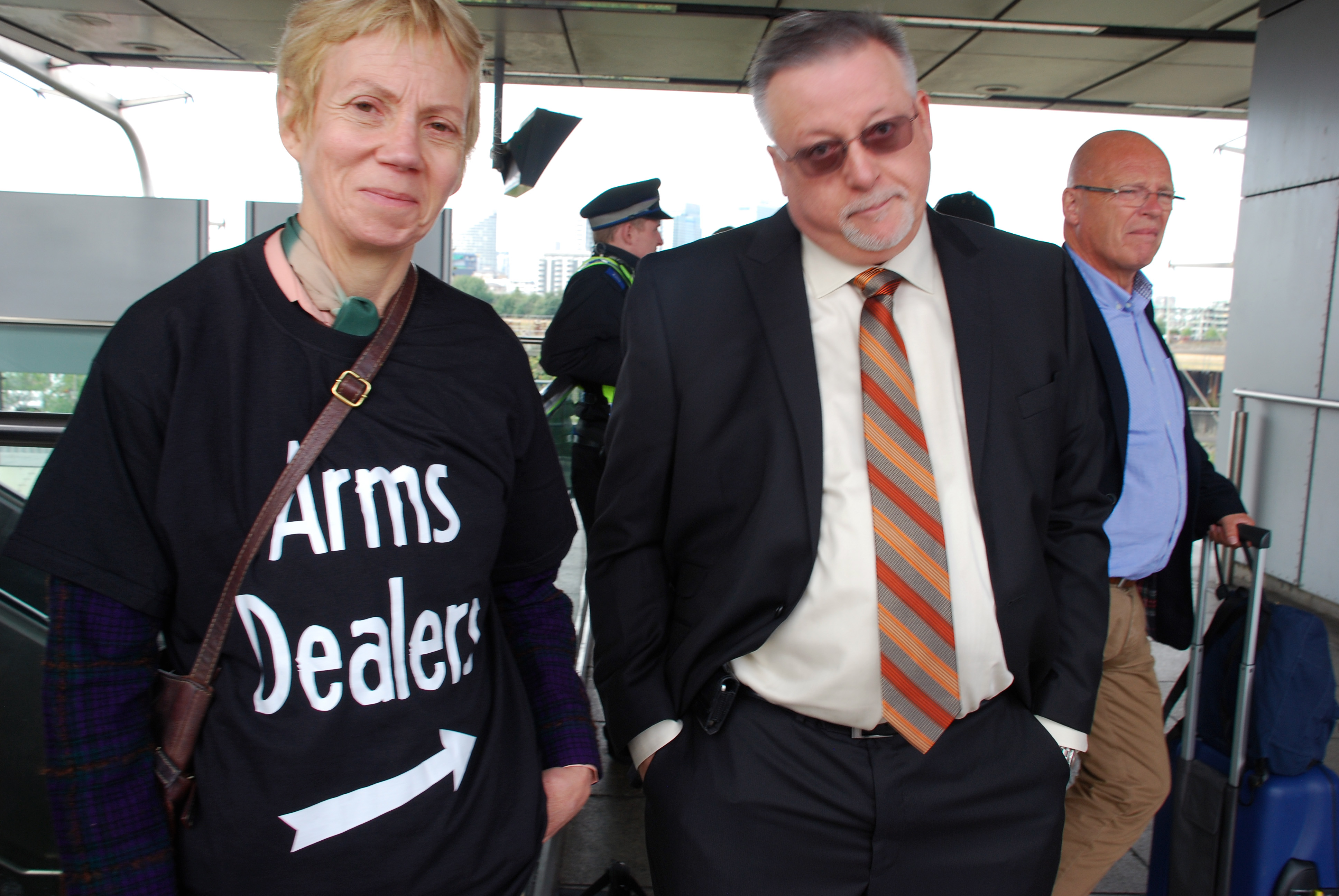 Let me explain. A number of us have been lobbying against the existence of £100 million invested in arms companies through the West Midlands Pension Fund (WMPF), investments made out of Council Tax money. Just over a year ago, one of the companies involved, Lockheed Martin no less, took over some small offices in Coventry. The world’s biggest arms-dealer was now just five minutes’ walk from the Council House, in Coventry University’s Technology Park.

So now, I can catch a bus from outside my house and get off ten minutes later right next to Lockheed Martin. Has my life been improved by this, you may wonder?

Well, back in about February, it was discovered that nine of the companies funded by WMPF were under suspicion of still engaging in the cluster bomb trade, one of them being Lockheed Martin. We had held a GDAMS protest as near as we could get to their office, and handed in a letter (via the security staff), asking for a public statement confirming their permanent withdrawal from the cluster bomb business. Sadly, no reply was received, then or since. We have therefore felt entitled to carry on our campaign against them.

You will have twigged that we were not allowed to protest in front of Lockheed’s offices. In fact, we were prevented from entering the site altogether, which belongs to Coventry University. Alumni, please note. When we arrived, Security had been on duty since 7am, waiting for us. We turned up at 12.30pm. When you live next door to your adversary, you don’t need to get up so early, and you can always come back later!

After the protest, it occurred to me that I could keep advertising the existence of Lockheed Martin on site by putting up little notices indicating that we were still waiting for an answer, and doing the reputation of Lockheed Martin no good at all. I started putting them on the car park payment booths, in the canteen suggestion box and on the board displaying Lockheed’s name. This irritated them so much that they took their name off the board. Luckily, Reception will still tell you where they are, if you ask. The board has remained empty, despite being frequently covered with ‘Lockheed Martin, world’s number 1 arms-dealer’ notes.

I should point out that the notes are just bits of paper with Blu-Tack on the back. They cause no harm to persons or property. Unlike Lockheed Martin’s products. At least, that was what I thought until about a month ago, when I was spotted by a member of security, who complained to me that staff had been ‘mentally scarred’ by these notes, implying that they were making cluster bombs, Hellfire missiles and Trident nuclear warheads. I said I knew it wasn’t them specifically, it was the company they worked for. Apparently the University bureaucracy has been clogged up with reports going in week after week about these notices appearing all round the site. The Head of Security himself explained to me that they had a duty to keep their clients happy, by which I think he meant that Lockheed Martin were complaining that their life was being made uncomfortable. I said I understood, and we parted on good terms.

The disadvantage is that now I am spotted on CCTV as soon as I appear, so I have had to recruit more accomplices who are not so readily recognised. But then this has the advantage of involving more people in little acts of defiance. The tactic has now spread to other key sites in the city, including the Cathedral and the University itself. The more people there are involved, the less the authorities can do to stop it. Maybe Lockheed will one day feel that Coventry, the ‘City of Peace and Reconciliation’, as it likes to be known, is not the place for them- which it isn’t.

If you’d like to take action to target your local arms dealer, you can find them by putting your postcode in CAAT’s arms trade map. You can find more ideas on how to draw attention to them, and you can contact outreach(at)caat*org*uk for help organizing your own action.