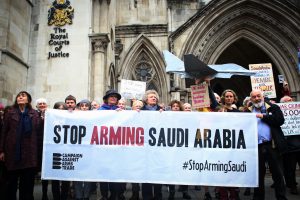 In October CAAT launched a new legal challenge to stop the sale of UK weapons to the Saudi-led coalition for use in the war in Yemen.

This follows our initial Court of Appeal win in 2019, which meant hundreds of millions of pounds worth of arms sales were put on hold after the government was forced to suspend issuing new licences while reviewing all pre-existing arms exports.

Yet the government’s review was a whitewash and in July the government resumed issuing arms export licences for use in the war in Yemen.

2021 will see CAAT back in court. Our action will continue until we stop these sales once and for all.

2. Uncovering UK complicity in police violence around the world

An investigation by CAAT and The Independent in June revealed that the UK had licensed at least £34 million worth of tear gas sales to over 50 countries, including some of the world’s most abusive regimes and dictatorships. We also exposed how the UK College of Policing trained both the Nigerian and Hong Kong Police, who have been cracking down on peaceful protesters.

Following the killing of George Floyd and the US police’s violent repression of Black Lives Matter protesters, CAAT supported Early Day Motion 520 calling on the UK government to immediately suspend the sale of tear-gas, riot shields and rubber bullets to the United States. Campaign messages from CAAT supporters reached 98% of MPs. 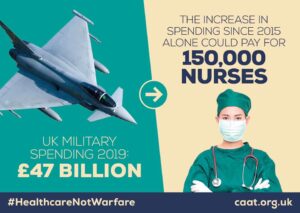 In September CAAT gave evidence to the International Trade Committee, challenging the notion that the UK has one of the most ‘rigorous and robust’ arms export control systems in the world and calling for greater transparency in “open licences” so that the true level of UK arms exports is known.

CAAT’s “Fighting the wrong battles” report was launched at a parliamentary meeting in February. This highlighted how a move away from militarism and the arms trade towards tackling climate change would create more jobs and increase human security.

In solidarity with Palestinian civil society, CAAT continued to support activists across the UK calling for the government to impose an immediate two-way arms embargo on Israel in 2020.

In August, we supported the Stop Arming Israel Day of Action, calling on HSBC to end its complicity in Israel’s human rights abuses.

CAAT’s work featured in over 1,100 articles last year. This piece in The Observer was instrumental in persuading broadcaster Clare Balding not to attend or speak at an annual gala dinner hosted by the arms industry.

Metro, Daily Mail and The Guardian were amongst those who covered our story on the resistance to a ship transporting arms to Saudi Arabia and our response to the proposed Saudi takeover of Newcastle United FC was picked up by The Mirror, The Guardian, Daily Mail and Daily Express.

The pandemic did not stop arms fairs from going ahead nor did it prevent our local groups from trying to stop them. Partnering with a broad coalition of activist groups, Liverpool Against the Electronic Arms Fair succeeded not only in having “Electronic Warfare 2020” cancelled but, following a barrage of over 40,000 emails and a video by Alexei Sayle, Liverpool’s Mayor agreed to implement an ethical charter ensuring that such events will not take place in the city again. 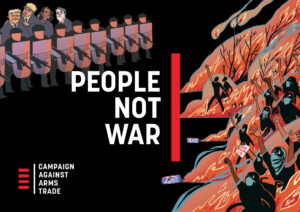 CAAT ran a number of popular virtual events last year including an “Arms Trade Research 101” training session and an “Arms Trade 101 & Intersecting Issues” panel discussion that attracted over 500 sign-ups worldwide. This event was followed by our very first 6-week reading series exploring how the arms trade links to a range of issues including policing, militarised borders and the UK’s ongoing relationship with Saudi Arabia.

In collaboration with Corporate Watch, CAAT’s “How to Investigate Your University” training session resulted in a range of student reports covering the links between universities and the arms trade.

CAAT’s London group produced a virtual walking tour that connects London-based arms companies with the weapons used by US police on the Black Lives Matter protesters. A video will be available on CAAT’s YouTube soon.

CAAT also re-published our “People Not War” zine, addressing the danger of global hyper-capitalist pursuits that result in oppression and death, calling for the prioritisation of lives and our planet. The “People Not War” podcast is coming soon.

8. Challenging the arms trade in Scotland

CAAT hired our first ever Scotland Coordinator, Emma Cockburn, to strengthen and support our work there. Emma is working with campaigners across Scotland to call on the Scottish Government to publish and halt funding of arms companies.

CAAT and the Sunday Mail also uncovered the extent of arms companies’ use of Scottish government grants (including those exclusively intended for civilian projects) to build weapons.

9. Exposing allegations of corruption in an arms deal with Saudi Arabia

After years of delay the Serious Fraud Office announced in July 2020 that it had brought charges in relation to allegations of corruption in a £2 billion arms deal agreed by GPT (a subsidiary of Airbus) to supply the Saudi National Guard.

Thousands of CAAT supporters took action to shine a spotlight on this case – thank you to everyone who made sure that the government could not sweep it under the carpet.

If you want to get involved in CAAT’s activism and find out more about what we have in store for 2021, you can sign up for email updates here – and if you can afford it, please donate to support our efforts to end the arms trade here.