BAE Systems is one of the world’s largest arms producers, with 95% of its sales being to military customers. 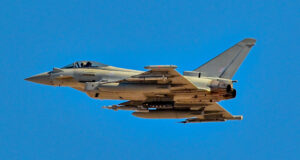 BAE has 6,300 staff in Saudi Arabia to support the operational capabilities of the Saudi armed forces. In 2016, during the attacks on Yemen, the company stated that “the Group’s extensive in-Kingdom training and support activities are at a high tempo. The Royal Saudi Air Force has achieved high utilisation and aircraft availability across its Typhoon and Tornado fleets, operating under demanding conditions.”

Complaint to International Criminal Court: In December 2019, a coalition of European and Yemeni groups submitted a complaint to the International Criminal Court in The Hague asking for an investigation into whether senior arms company executives and government officials may be responsible for aiding and abetting war crimes in Yemen. The complaint listed BAE Systems, Leonardo, Airbus, Dassault, Raytheon UK, RWM Italia, MBDA, and Thales.