Leonardo (formerly Finmeccanica) is one of the world’s largest arms companies. Its $11 billion of arms sales in 2019 comprised 72% of total company sales.

Leonardo is very much an Italian company, with the Italian Ministry of Economy and Finance owning 30.2%, but there is also substantial production in the UK and US. It owns what used to be Westland Helicopters, which became part of AgustaWestland and is now Leonardo Helicopters.

The company has four business sectors:

The company has been the main supplier of helicopters to the UK military. Its Apache attack helicopters (built under licence from Boeing) operated in Afghanistan and Libya. Its Lynx helicopters were used in the invasion and occupation of Iraq.

The T-129 attack helicopter – jointly developed by Leonardo and Turkish Aerospace Industries – has been extensively used by Turkey in its military operations against Kurdish groups.

The many other deals include a recent sale of 32 helicopters to the Egyptian military. 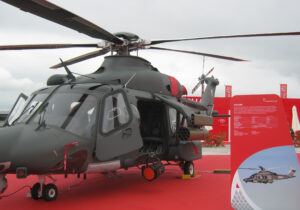 An AgustaWestland AW139M helicopter on display at Farnborough 2012

Another of Leonardo’s highly visible products is the Eurofighter Typhoon, manufactured along with Airbus and BAE Systems. The Typhoon has been used by the Saudi military in its devastating attacks on Yemen over the past six years.

Leonardo’s website boasts of its four decades of partnership with Saudi Arabia, which includes the Eurofighter Typhoon, electronic systems for the Typhoon and also the Tornado combat aircraft, military drones, radios and naval systems.

Leonardo also boasts of its “long standing experience in the border control sector“.

It provides more details of the lens through which it sees borders: “Our solutions for Border, Territory & Maritime Control enable net-centric operations for border guards, patrol units, special forces, and all those components of the armed forces that conduct the protection of the national borders and the homeland territory.”

More information on Leonardo’ borders activities can be found in The Business of Building Walls (pages 32-33, in particular).