UK-made weapons are being used in Saudi Arabia’s devastating attacks on Yemen, which have killed thousands of civilians and created the world’s largest humanitarian catastrophe.

The UK is one of Saudi Arabia’s leading arms suppliers, along with the US. It is also a major supplier of arms to the United Arab Emirates, another country in the coalition that is bombing Yemen.

The UK has continued to support air strikes by Saudi Arabia and its coalition partners, providing both arms and ongoing maintenance and support, in spite of overwhelming evidence of repeated breaches of international humanitarian law by the coalition.

The UK-made equipment used in the war includes Typhoon and Tornado aircraft, Paveway bombs and Brimstone and Stormshadow missiles.

The published value of UK arms licensed for export to the Saudi-led coalition since the bombing began in March 2015 is £8.6 billion (including £7.1 billion to Saudi Arabia alone); however, CAAT estimates that the real value of arms to Saudi Arabia is over £23 billion, while the value of sales to the Coalition as a whole (including UAE and others) is nearly £25 billion.

The licence figures do not include the value of ongoing maintenance, training, and technical support that BAE Systems provides to the Royal Saudi Air Force in Saudi Arabia. This support is absolutely essential to Saudi Arabia’s ability to wage its war in Yemen.

Published value of UK arms licensed to Saudi Arabia since the bombing began in March 2015.

The licences to Saudi Arabia include:

OIELs allow for multiple deliveries, in unlimited quantities, for the period of validity of the licence, usually 3 or 5 years. No financial data is attached to these licences. Such licences included a 5-year OIEL issued in August 2014 for bombs and missiles to Saudi Arabia, of exactly the types used in the Yemen war. OGELs are pre-issued licences, valid indefinitely, for which companies can pre-register, removing the need for individual licences for equipment and destinations covered. OGELs relevant to Saudi Arabia including one covering UK Government defence agreements, such as the Saudi British Defence Cooperation Programme, which covers equipment and services for Saudi Arabia’s UK-supplied Tornado aircraft, and another covering the multi-nation Eurofighter Typhoon programme, which covers equipment and services to partner countries and export customers (such as Saudi Arabia) relating to the production and maintenance of the Typhoons.

The licence figures also do not include the value of ongoing maintenance, repair, overhaul, and technical and logistic support services that BAE Systems provides to the Royal Saudi Air Force in Saudi Arabia, supporting the BAE-supplied Tornado and Typhoon aircraft. In total, according to BAE’s annual reports, the company received £20 billion in revenues from the Kingdom of Saudi Arabia Ministry of Defence and Aviation between 2015-2021.

This figure dwarfs the figure for SIEL licences, and does not include most of the bombs and missiles etc. sold to the coalition, most of which come from  MBDA and Raytheon Systems UK, or sales to the other coalition members.

Thus, while the full scale of UK arms sales to Saudi Arabia cannot be known, due to the lack of transparency in the data provided by the UK government, we can be confident that the value of sales to Saudi Arabia since the beginning of the war total are over £23 billion*, while sales to the Coalition as a whole are likely to be close to £25 billion.

BAE Systems has 6,700 employees in Saudi Arabia supporting the Saudi Air Force, as part of the British-Saudi Defence Cooperation Programme of 2006. This is the successor of the Al Yamamah deal under which Tornado aircraft were sold to Saudi, and the Al Salam deal of 2007, which involved the sale of Eurofighter Typhoons, with the associated support package.

Both agreements are government-to-government agreements between the UK and Saudi Arabia, for which BAE is the prime contractor. In addition, there are around 100 serving UK military personnel and a similar number of UK government civilian officials providing advice and support to the Saudi military under the agreements.

This work includes deep maintenance on the Tornado and Typhoon aircraft involved in the war in Yemen, to enable them to remain operationally ready. It also appears to include preparing the armaments for planes for operational missions, or at least acting in a supporting capacity for Saudi personnel undertaking these tasks.

This maintenance, training, and technical support, is absolutely essential to Saudi Arabia’s ability to wage its war in Yemen. A former BAE Systems employee, who had recently worked in Saudi Arabia, told Channel 4’s Dispatches, in a programme which aired in April 2019, “With the amount of aircraft they’ve got and the operational demands, if we weren’t there in 7 to 14 days there wouldn’t be a jet in the sky.”

Former Saudi Air Force officer Yahya Assiri confirmed in the same programme, “Without the Typhoon they will stop the war… The Saudis they can’t keep the Typhoon in the air without the British.”

The US military and arms companies provide similar support for the other, US-supplied half of the Saudi Air Force. Bruce Riedel, Senior Fellow at the Brookings Institute, wrote in 2018, “The Royal Saudi Air Force (RSAF) is entirely dependent on American and British support for its air fleet of F15 fighter jets, Apache helicopters, and Tornado aircraft. If either Washington or London halts the flow of logistics, the RSAF will be grounded.”

* This is based on the £20 billion of BAE revenues from the Saudi MOD since 2015, the £4 billion in SIELs for bombs, missiles etc. to Saudi Arabia (which come from other companies), then deducting an estimated amount for BAE’s revenues in the part of 2015 before March 26, when the Saudi bombing campaign started. The resulting estimate is around £23.4 billion. Adding the £1.5 billion in SIELs to other members of the Coalition brings the estimate to around £24.9 billion. 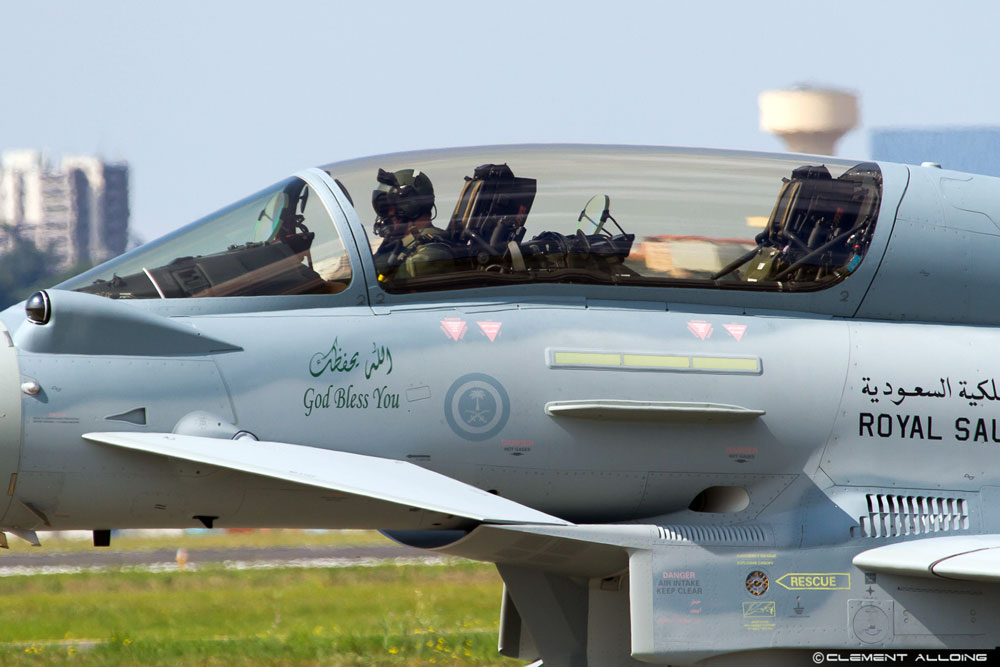 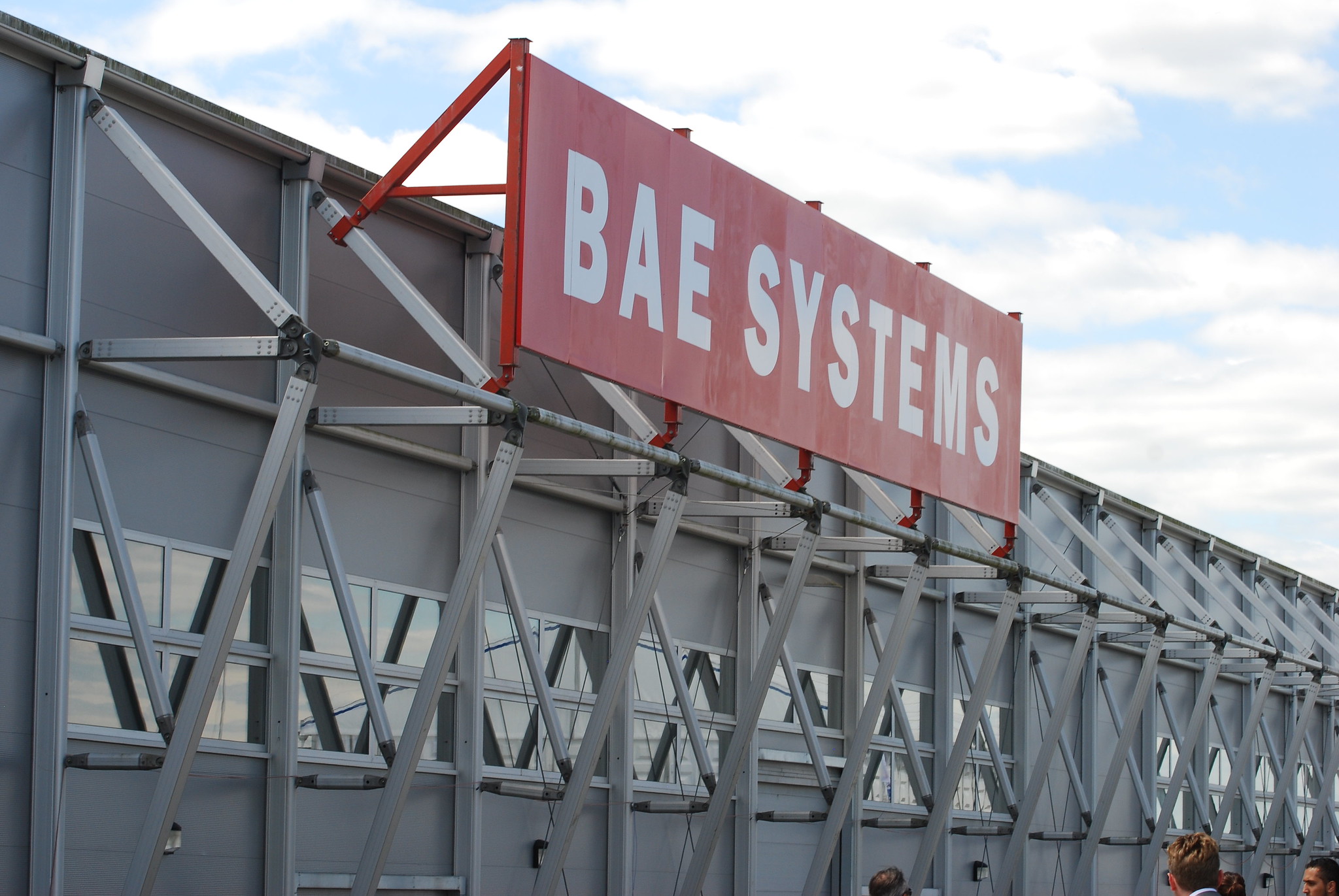 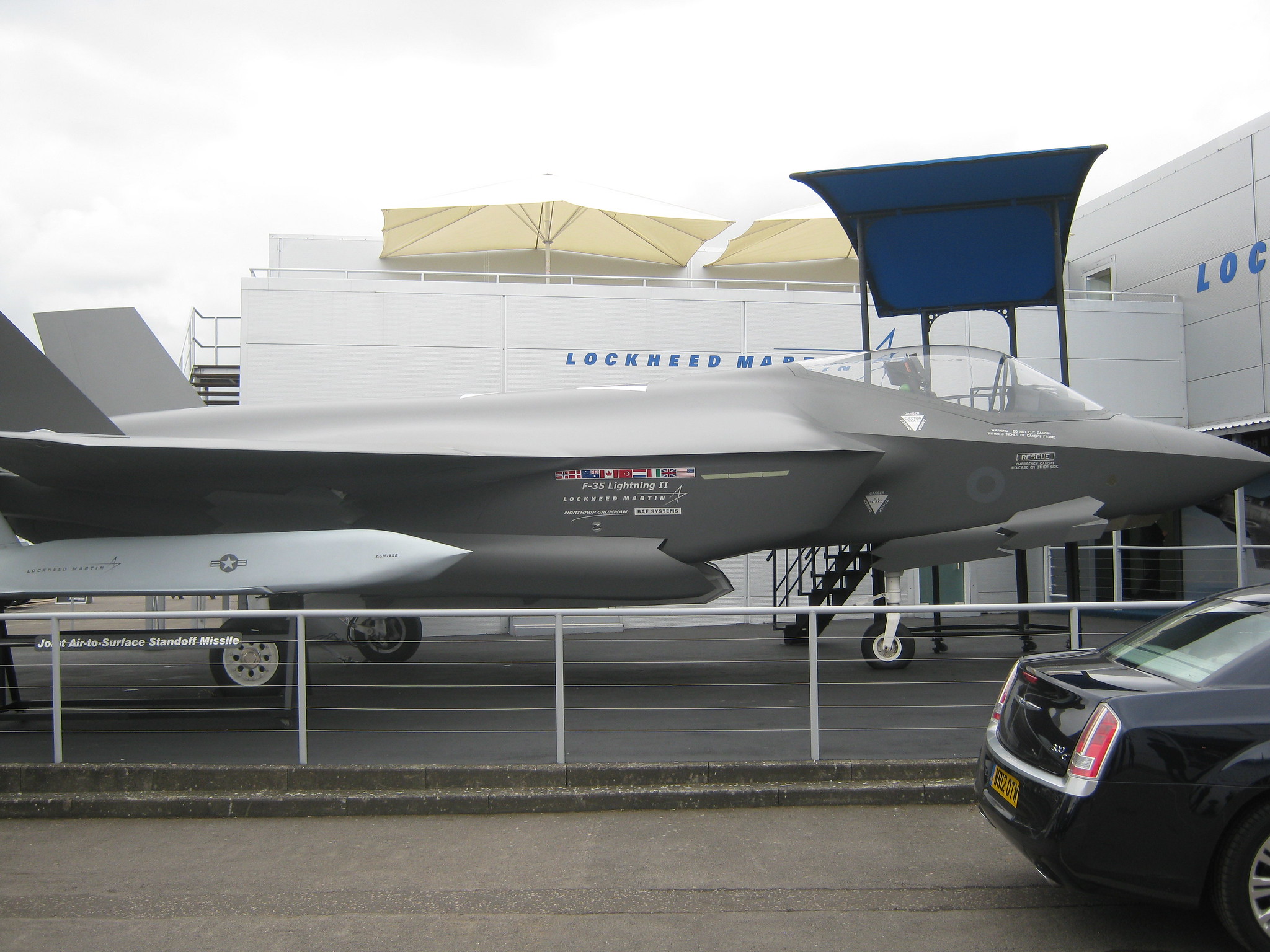 Find out who else is supplying the Saudi-led coalition. 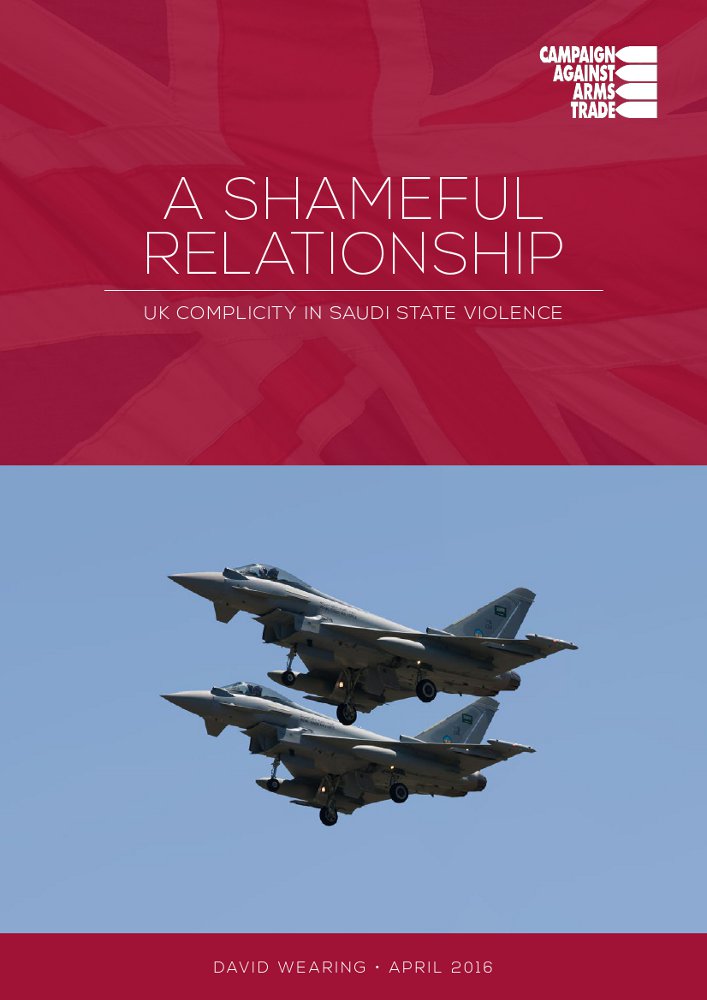 This report explains the nature of UK arms sales to, and military cooperation with, Saudi Arabia.

More than 80 companies, at more than 350 locations in the UK, have applied to export military equipment to Saudi Arabia. 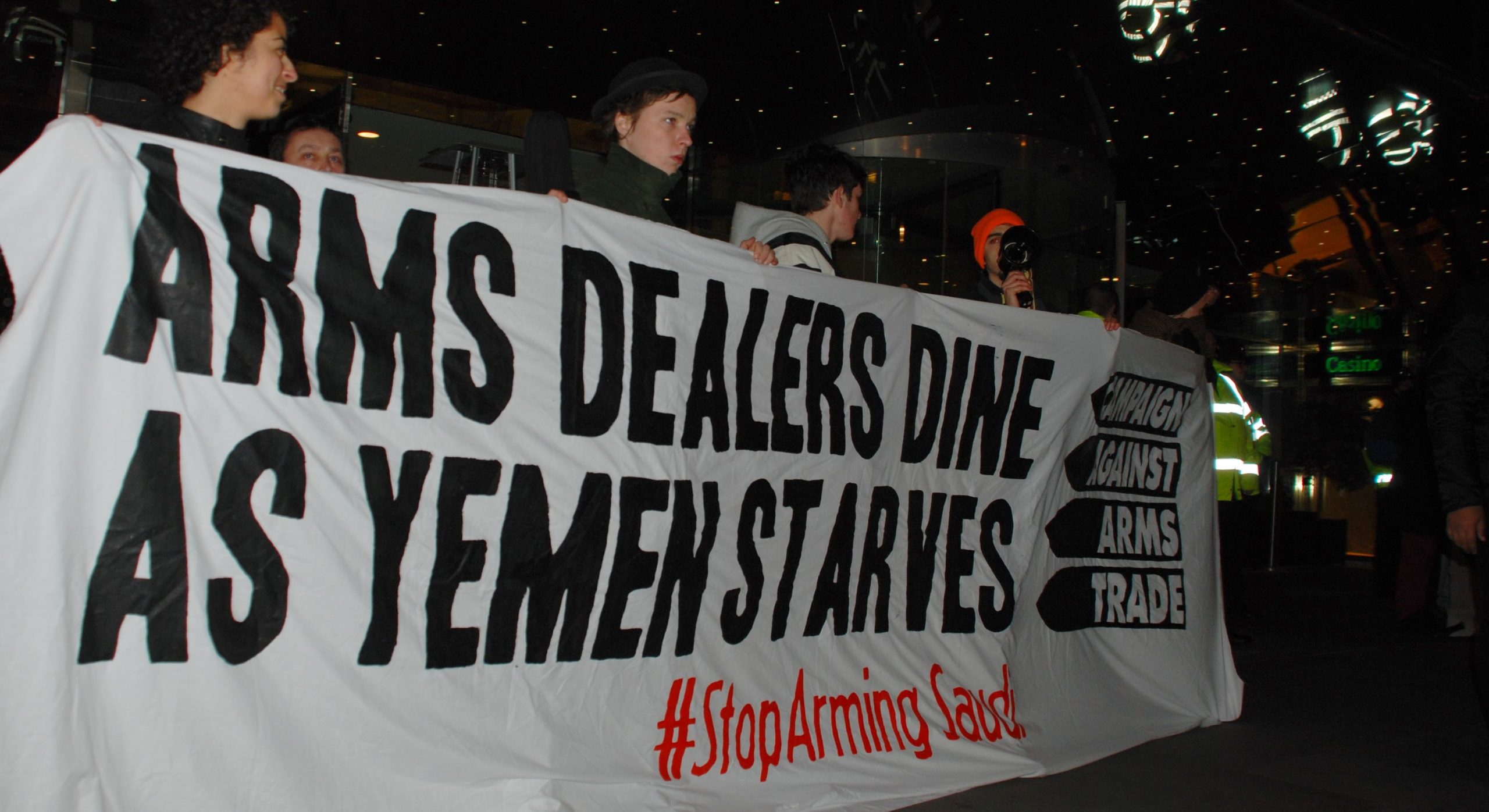 The war in Yemen has created the world’s worst humanitarian crisis. This is an entirely man-made catastrophe. It is a direct result of the devastating war in the country, and the strategies and tactics adopted by the parties to the conflict, especially the Saudi-led Coalition.